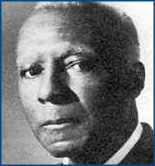 “The essence of trade unionism is social uplift. The labor movement has been the haven for the dispossessed, the despised, the neglected, the downtrodden, the poor.”
A. Philip Randolph

In 1964, A. Philip Randolph received the Medal of Freedom from President Lyndon Johnson. The honor was a fitting tribute for a man whose life was marked by one historic accomplishment after another. Achievement that included his pivotal role in establishing the Sleeping Car Porters union in 1925, his high-profile effort to force President Truman’s Executive Order banning discrimination in the military and his election as the first black vice president of the AFL-CIO in 1955.

The George Meany Memorial Archives offers a fine biographical sketch of Randolph and an online exhibit based on the 1992-2001 traveling exhibit on A. Philip Randolph sponsored by the AFL-CIO. Click Here.

This entry was posted in Uncategorized. Bookmark the permalink.

“Imagine opening a high school U.S. history textbook and finding no mention of —or at most a passing sentence about—Valley Forge, the Missouri Compromise, or the League of Nations…”

This excellent photo-packed 62 page history of unions is for 9 -12 year-old students. Search online to purchase.

Home of the leader of America’s first all-female union

The Power in our Hands: A curriculum on the History of Work and Workers in the United States is the single best resource for middle and high school teachers who want to integrate labor history into their classrooms. It is organized into five units and 16 lessons and includes 46 handouts includes a bibliography for each unit. Click HERE to order for $23.00.

Union Communications Services , sponsored by the Worker Institute at Cornell ILR, produces materials, media, context and commentary that worker-leaders can put to use immediately.

Resources for teachers who have a limited amount of time to incorporate labor history into their classrooms.

Traces the history of the labor movement from its beginnings to the late 20th century.

A description and order information for two excellent labor history films to supplement "A Short History of American Labor" - If You Don't Come in on Sunday, Don't Come in on Monday and The Inheritance

A standards-based curriculum for teachers for grades 5-12 by the 9/11 Tribute Center at the World Trade Center.

A History of Union Banners